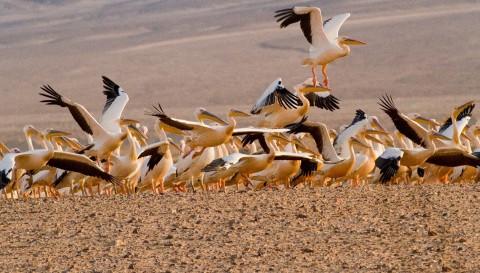 The Migratory Soaring Birds (MSB) Project: Mainstreaming Conservation of Migratory Soaring Birds into key productive sectors along Red Sea/Rift Valley flyway has been selected as a national winner of the 2020 Energy Globe Award this year for its role in the protection of Egypt’s nature and its commitment to put ambitious sustainable development programs as a national priority.

The Energy Globe Award is the most important environmental award in all parts of the world in which projects that aim to protect our environment around the world are evaluated and it is awarded for the best projects in the following five categories: Earth, Energy, Water, Air and Youth. For the MSB Project to win this award is an evidence to the project's outstanding efforts over the past years by working to mainstream programs for the conservation of migratory soaring birds in partnership with governments, the private sector and the civil society organizations involved in the Energy sector.

The Migratory Soaring Birds Project – MSB is funded by the Global Environment Facility (GEF), coordinated by the United Nations Development Program (UNDP) and implemented by Regional Flyway Facility at BirdLife International. In Egypt, the project is implemented by the Egyptian Environmental Affairs Agency (EEAA) under the Ministry of Environment with support from BirdLife partner in Egypt Nature Conservation Egypt (NCE).

The MSB Project became a regional leader in mainstreaming conservation of migratory soaring birds in countries located along the Red Sea/Rift Valley Flyway, after KFW paved the way & sat an example for other international financial institutions to fund new energy projects along the flyway and work with them to fine-tune and implement proper safeguards for the sector.

The project has worked for the past decade with governments and civil society organisations to conserve migratory birds and mainstream conservation measure, providing a platform that links the conservation efforts in the north and south with the flyway. These tremendous efforts have earned the project the recognition of a one of the “national winner” of this prestigious award and allowed it to shine among 2500 other initiatives and projects worldwide; an affirmation of Egypt's efforts to preserve and protect the environment and put sustainable development programs as a national priority.

“Receiving the Energy Globe Award is an evidence to the enthusiasm of the Ministry of Environment to place bird conservation and biological diversity programs on the priorities of national action plan. It also shows the extent of the Ministry’s commitment to activating its international obligations towards the United Nations Conventions on Biodiversity and Migratory Species,” says Osama Elgebaly, the National MSB Project Manager in Egypt.

He added, “This award is considered as the success story of the Ministry of Environment in building strong partnerships with the concerned authorities, especially the development sectors such as the energy sector”.

Osama Al-Nouri, the Regional Flyway Facility Coordinator, praised the achievement of national project and its partners in Egypt. “The way by which the project in Egypt led the work matching GEF, UNDP and BirdLife (at global, regional and national levels) interests under the umbrella of the Government of Egypt ( mainly EEAA and the New and Renewable Energy Authority - NREA) with International Financial Institutions and wind farm developers was ideal in showcasing mainstreaming in operation and at its best.”

The Energy Globe Award is one of the highest environmental awards in the world, and its aim is to provide successful sustainable projects that serve a broad audience. These projects offer promising and applicable solutions to many of our environmental problems, whether with the aim of preserving our natural resources or those that are used sustainable energy.