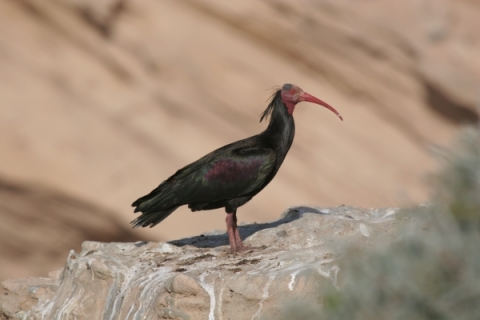 On Sunday the 19th of May 2013, the Syrian Society for Conservation of Wildlife (SSCW, BirdLife Partner) held a national workshop on the status of the Northern Bald Ibis and the Sociable Lapwing which provided explicit recommendations for the conservation of these two critically endangered birds. The workshop held under the patronage and in presence of his Excellency the minister of agriculture Ahmad Al Kadiri, and in collaboration with the Royal Society for the Protection of Birds and BirdLife International represented by the RFF coordinator Mr. Osama Al Nouri, gathered various national experts and governmental representatives. The need to appoint national focal points dedicated to endangered species in Syria, to build the capacity of responsible bodies and to engage with local communities were identified as necessary steps towards the conservation of these birds on the verge of extinction.

The major recommendation provided, was to delegate SSCW the responsibility to draft a national hunting management plan to be presented and discussed during a follow up national workshop set to take place within the next 3 months. Furthermore, the participants unanimously expressed the need to see in place a new hunting legislation that will take over the current transition period that has seen endless renewal of the ineffective hunting ban.

Syria is home to a great diversity of birds and unfortunately to uncontrolled hunting as well. Despite the current unfortunate unrest that the country faces, SSCW and the migratory soaring birds project are determined to work towards the regulation of hunting in Syria to prevent other species to join the infamous endangered list.