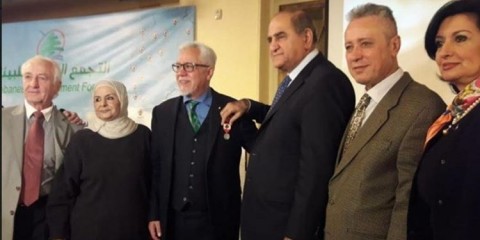 Former Minister of Environment Tariq Al Khatib honored Assad Serhal, the Director General of Society for the Protection of Nature in Lebanon – SPNL (Birdlife Lebanon), on behalf of President Michel Aoun for being named one of the winners of the 2018 MIDORI Prize for Biodiversity. At the awarding ceremony, held by the Lebanese Environment Forum (LEF) at Coral Beach Hotel in Beirut, Assad Serhal was given the Silver Lebanese Order of Merit Medal from the President.

"We are gathered here today to honor a unique person, whose environmental work has shone through his long journey of defending Lebanon’s nature” Khatib told Sarhal. "In recognition of your unlimited efforts in the environmental sector in Lebanon, President Michel Aoun has decided to grant you the Silver Lebanese Order of Merit Medal, and it is my honor to give you this Medal and to extend my warmest congratulations to you" He added.

The ceremony was attended by President of the Middle East Sustainable Hunting Centre Adonis Khatib and the the General Secretary of LEF Malek Ghandour, who gave a welcome speech, thanking Serhal for his many contributions in the environmental sector and nature conservation. Serhal thanked the Lebanese President for the great honor he received and he praised LEF’s support and thanked them for hosting the event. Furthermore, he gave attributes to BirdLife’s constant support of SPNL and for nominating him for the MIDORI prize for his vision & work on Himas.

Serhal was awarded a commemorative gift and plaque and a monetary prize of 100,000 US dollars to support his environmental work in Lebanon. The biennial international prize, organized by the AEON Environmental Foundation and the Secretariat of the Convention on Biological Diversity, honors individuals who have made outstanding contributions to the conservation and sustainable use of biodiversity at global, regional or local levels. Serhal was among the three winners of the prestigious MIDORI Prize for Biodiversity for 2018, alongside Dr Kathy MacKinnon from the UK, Chair of IUCN World Commission on Protected Areas; and Dr Abdul Hamid Zakri from Malaysia, Former Science Advisor to the Prime Minister of Malaysia.