Earlier this year, BirdLife held a 3-day workshop to mark the inception of Tranche II of the Migratory Soaring Birds (MSB) project, which is funded by the Global Environment Facility (GEF), and implemented by BirdLife International, through United Nations Development Programme (UNDP). The Project is designed to unite efforts of bird conservation NGOs within key productive sectors that threatens - or even can benefit -  migratory soaring birds passing through the Rift Valley/Red Sea Flyway being the 2nd most important flyway in the world.

During Tranche I of the project, BirdLife Partnership mainstreamed bird conservation within the hunting, energy, tourism, agriculture & waste management sectors. This was done through organized and effective plans that resulted in many achievements that shaped an otherwise unpredictable future for the ambitious winged guests passing through the region, as their journey is filled with uncertainty.

In the agricultural sector, efforts of advocating the MSB guidance were definitely rewarding. After regional consultations with governments, NGO’s and the private sector, the MSB Project was able to publish an “Agriculture and the Conservation of Migratory Soaring Birds in the Rift Valley/Red Sea Flyway” and a guideline on “Preventing the Risk to Migratory Birds from Poisoning by Agricultural Chemicals.

Furthermore, the developments within the MSB Project in this sector contributed to issuing the UNEP CMS Resolution 11.15 on “Preventing Poisoning of Migratory Birds”, and similar efforts on the side of the African-Eurasian Waterbird Agreement (AEWA) to protect MSBs and other migrants from poisoning threats. 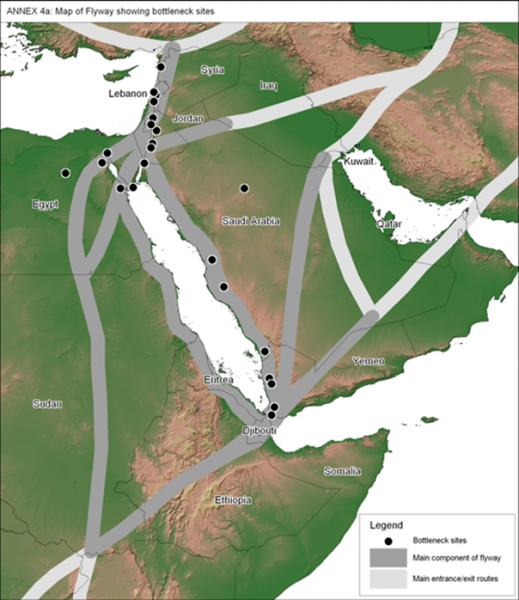 Results were just as accomplished in the energy sector, as the project focused on addressing the rapidly emerging threats of bird’s collision and electrocution, caused by the increased installation of wind turbines, power lines and pylons along the flyway. Therefore, the MSB Project developed a pioneering free web-based electronic “Sensitivity Map” that is a rich source of updated information and data to help decision makers, developers international financial institutions and consultants decide on the sensitivity of selected sites to migratory birds.

The main collaboration in Egypt was framed trough the MoU signed by the project in Egypt collectively with the Egyptian Environmental Affairs Agency - EEAA and the New & Renewable Energy Authority - EEAA which ensures a working relationship between all parties to the service of bird conservation in the energy sector.

The energy sector is also benefiting from the project’s engagement with international financial institutions such as KFW, IFC, EBRD and others that are the main funding arms of new energy projects along the flyway and working with them to fine-tune and implement proper safeguards for the sector.

Moreover, work is in progress towards cutting-edge pioneering regional tools including usage f radars in bird monitoring, experimenting of the “Shut-Down On-Demand” methodology at wind farms during migration seasons as leading mitigation methods.

One of the notable achievements of Tranche I in the energy sector was the disconnection of Port Sudan Killer Line known by previous studies to have caused many soaring bird mortalities. BirdLife Partner in Bulgaria along with the project have worked tirelessly with the Sudanese Wildlife Society, to shed a light on the fatal dangers of the infamous Port Sudan power line. Ultimately, their hard work paid off and the Killer Line was switched off. 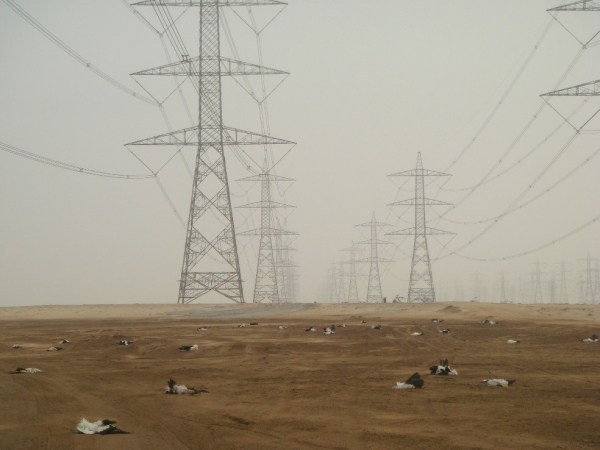 Hunting on the other hand is a deeply rooted cultural practice in the region.. However, the project has set a new trend in diminishing its threats, which are caused by new weapons and less “sophisticated” hunters. Thus, the successful Partnership managed to support responsible regional practices & schemes. For example, prominent hunters from Lebanon, Jordan, Syria, Palestine, Egypt, Yemen and Ethiopia have all publically signed a “Responsible Hunting Declaration”, which led to a considerable progress in these countries regarding the long-term commitment towards minimizing the threats caused by hunting MSBs and species in the region.

Moreover, the MSB project in Lebanon, in cooperation with the Society for the Protection of Nature in Lebanon (SPNL), has exceeded expectations in Tranche I, as it supported the issuance of 13 new hunting decrees that forms the backbone of implementing the hunting law in Lebanon enacted the 2004 law in 2017.  The project has also developed “The Hunter Manual Guide” as well as “The Hunting Permit Exam”, and has conducted several training workshops across the country to build the capacity of law enforcers and hunting clubs on bird identification and on the new hunting law. While the project pushed for a new legislation in Syria and supported the on-going enforcement process in Jordan.

Other achievements were involved in the Waste Management Sector, which is growing more important with each passing year in the Rift Valley / Red Sea Flyway region. Due to its tremendous ecological and environmental impacts on migratory soaring birds and biodiversity, the Partnership was keen to create sustainable solutions that effectively “manage” waste disposal sites such as landfills & sewage ponds in the region. For example, the MSB project developed a generic “Waste Management and the Conservation of Migratory Soaring Birds” best practice guidance for the region. Egypt remains on of the major focus countries for efforts in this regard

The tourism sector saw significant progress as well through the MSB Project, as the Partnership aimed at promoting and integrating MSB friendly practices in the sector, such as “A Guide for Tourism Business in the Rift Valley Red Sea Flyway” and “Guidelines of Best Practices for Bird Friendly Hotels in Egypt”.  The project has also published a manual for “Birdwatching in Jordan” that was associated with a capacity building birdwatching program.

In addition to that, MSB Egypt and the five star hotel management chain “Jaz Resorts & Hotels” have signed a Memorandum of Understanding that ensures a continuous technical support towards building the capacity of Jaz Hotels, allowing them to integrate bird conservation in the planning and management of their hotels successfully.

At the policy level, the project supported many countries in the region (e.g. Egypt, Lebanon & Syria) sign the CMS - Raptor Memorandum of Understanding as an overall endeavor to strengthen national commitments & linkages with international MEA’s. Such policies and laws can now pave the way for a more responsible practices at all sectors within Tranche II.

This partnership between BirdLife and GEF-UNDP will continue to sustain the important work of Tranche I for the upcoming five years through Tranche II of the MSB Project in the countries of Djibouti, Egypt, Ethiopia, Eritrea, Jordan, Lebanon and Sudan. While, there are still challenges in providing sustainable solutions and minimizing the risk of losing habitats and death, the MSB Project provides high hopes as it will continue to support migratory soaring birds conservation in the key sector through the implementation of “best practice guidelines”, capacity building sessions and delivery targeted national programs of work. Moreover, it will support the cooperation between statutory agencies and the private sector to address planning issues and environmental impact legislation in order to eliminate the threats of development on the flyway and MSBs.

Therefore, Tranche II is expected to open doors for greater engagement with the key sectors to prevent any further decline in MSBs populations, and raise awareness of the flyway and altered social and cultural behaviors among target groups that threaten MSBs in the key sectors, decision-makers and the public.