A call made for safe use of pesticides in Ethiopia 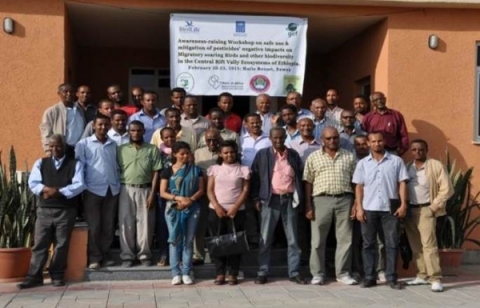 A call has been made for responsible use and a reduction of pesticides used in farm-based production in Ethiopia. This was during a stakeholder workshop held on 20th to 23rd February 2015 to raise awareness on safe use and mitigation of pesticides’ negative impacts on migratory soaring birds and other biodiversity in the Central Rift Ecosystems of Ethiopia. This event was organized under the auspices of the UNDP/GEF funded BirdLife Migratory Soaring Birds project.

Throughout the workshop, the 45 participants called for promotion of Integrated Pest Management (IPM) systems to stem environmental contamination and risk of human poisoning posed by the widespread usage of farm chemicals through unsafe means. They observed that imports of pesticides used in Ethiopia had dramatically increased in the recent years. However, this upsurge has not been paralleled by deliberate efforts to create awareness on safe use of chemicals. Many times, the small-scale farmers who contribute to most of the farm productivity in Ethiopia have not been adequately supported through training and extension services to ensure that pesticides are not abused. Most farmers employ “better safe than sorry approach”, which has led to over-use of pesticides.

The workshop was also an eye-opener to various opportunities for mainstreaming conservation considerations into economic growth strategies in Ethiopia.

“For Ethiopia to achieve its green growth vision, strategies such as Growth and Transformation Plan (GTP) have to consider biodiversity conservation, including migratory soaring birds”, said Mr. Mengistu Wondafrash, the Executive Director of Ethiopian Wildlife and Natural History Society (EWNHS, BirdLife in Ethiopia).  He further added that “growth should not be at the expense of losing invaluable and irrevocable biodiversity.”   Ethiopia is aligning its growth to be responsive to environment by promoting a Climate Resilient Green Economy (CRGE). “Given such opportunities, it is time for the migratory soaring birds conservation considerations to be reflected in such policy instruments as the CRGE since the country stands  to gain from economic activities such as avi-tourism through protecting the birds”, commented Mr. Alex Ngari, the BirdLife Flyways Officer for Africa. “This is because the CRGE will perhaps readily take up environmental considerations”, he added. Such considerations would also put Ethiopia on to the right footing to fulfilling its international obligations that she is a party to.

During the workshop, the regional guidance ‘Guidance on Agriculture and Conservation of Migratory Soaring Birds in the Rift Valley/Red Sea Flyway’ drafted by Birdlife International, through the GEF/UNDP Migratory Soaring Birds project, was endorsed as it resonated with what many of the participants advocated for. It was widely observed that it could contextualize the Ethiopian situation more for its successful application. Participants observed the need for more capacity building and grass-root coordination within government agencies to, among other things, address pesticides usage in agricultural practice.

The workshop was organized by EWNHS in collaboration with Horn of Africa Regional Environment Center/Network and PAN-Ethiopia and attended by representatives from Ministry of Agriculture, Food and Agriculture Organization, Desert Locust Control Origination-East Africa, NGOs, Civil Societies, Farmer Unions and Cooperatives, Private businesses, and the media, among others.