The MSB project advocacy efforts in 2014 were rewarded when both Syrian and Lebanese governments signed the CMS Memorandum of Understanding on the Conservation of Migratory Birds of Prey in Africa and Eurasia (Raptors MOU), which brings the total number of signatories to 50. The MSB project considers the signing of the Raptors MOU by project range countries as a priority as they both aim to protect migratory birds, share 33 species and operate in overlapping geographical scopes. 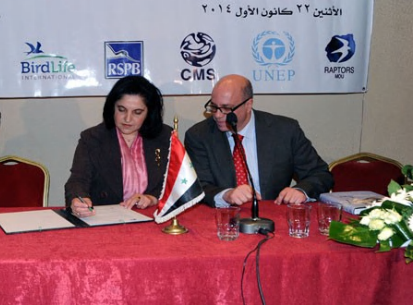 H.E. Dr. Nazira Sarkis, Syrian Minister of Environment Affairs, has signed the Raptors MOU on the 22nd of December 2014 during a World Migratory Bird Day celebratory event organized in Damascus by the Syrian Society for the Conservation of Wildlife (SSCW – BirdLife Syria) and funded by the MSB project. Representatives from the Ministry of Agriculture and Agrarian Reform and the Ministry of Tourism were among the participants to this World Migratory Bird Day celebration which 2014 theme was “Destination Flyways: Migratory Birds and Tourism”. Dr. Nazira Sarkis has described the Signing of the Raptor MoU as a “great environmental achievement for Syria” and highlighted the government’s willingness to develop a national strategy and action plan to conserve birds despite the current unrest in the country.

Mr. Ahmad Kadeesh, Deputy Minister of Agriculture and Agrarian Reform, stressed on the importance of the continuous collaboration with the Ministry of Environment Affairs with regards to biodiversity conservation and indicated that the development of the new hunting law that protects raptors is in its final stage.

SSCW chairman of the board, Dr. Nabegh Ghazal Asswad, reiterated the organization’s commitment towards biodiversity conservation and especially migratory birds that hold an important place on the agenda of several international institutions.

“The signing of the this MOU is an important milestone that will open new doors for bird conservation in Syria” declared Mr. Osama Al Nouri, MSB project regional coordinator, concluding on the geographical importance of Syria within the Rift Valley Red Sea flyway “the 2nd most important for migratory soaring birds in the world”.

On the 28th of December 2014, the Minister of Environment in Lebanon, H.E. Mohamad Al Mashnouk, has signed the Raptors MOU as a result of a process initiated and spearheaded by the MSB project national team. Mr. Al Mashnouk declared that “this memorandum will allow Lebanon to work through the new legal framework that it states, in order to protect migratory birds along the African-Asian flyway”.

Mr. Al Mashnouk added that “this MOU will assist Lebanon to commit to a clear road map to protect key migratory raptor species”. The Minister believes that this important achievement is a stepping stone towards the implementation of the new hunting law.

Dr. Saleem Hamadeh, MSB project manager in Lebanon, expressed his satisfaction: “the small territory of Lebanon is one of the most important segments along the Rift Valley Red Sea flyway due to its nature as a bottleneck and due to the diversity in landscape and corridors which attracts soaring birds and raptors. this MOU is an added value to the extremely important hunting decrees and decisions that were adopted by the Lebanese Government, in cooperation with the United nations Development Programme and the MSB project in Lebanon, making Lebanon a vanguard in the region in presenting a modern concept to the organization of hunting and control over violations in line with international tendencies”.

Lebanon is considered a bottleneck country lying in the heart of the Rift Valley Red Sea flyway and witnessing the tremendous migration of millions of soaring birds, the majority of them being raptors. Unfortunately, the country is also notorious for its unregulated hunting sector with several hundreds of thousands of hunters that hunt indiscriminately all year long.